Psilocybe cubensis is among the fastest and best-known growing strains. This variety has been widely studied and researched; it is commonly known because it can be cultivated easily.

Due to the increasing number of people who cultivate Cubensis, many new strains have been created.

The magic mushrooms don’t seem to have changed; they are still extraterrestrial. However, appearances can be deceiving, given that these particular kinds of mushrooms, or “shrooms,” are known to produce potent psychedelic effects.

There are two critical ingredients in Psilocybe cubensis: psilocin and psilocybin, which profoundly affect the human mind. After using magic mushrooms, people may experience a wide range of symptoms, including euphoria, hallucinations, nausea, and vomiting.

Some factors that show the varieties of Cubensis strains include:

One of the facts about the Cubensis strain is that the magic mushrooms grow in different shapes and sizes. They are abundantly produced in tropical and subtropical regions.

This cubensis thrives where there is cattle dung and enough manure. Because it is quickly grown, and considering the environment and conditions for its cultivation, it is one of the most commonly cultivated species.

Some of the Psilocybe cubensis varieties are easier to cultivate than others. Some of the types produce more significant, unique flushes than others.

In comparison with humans, mushrooms produce fruits similarly. Products differ depending on the mushroom spore. They have particular strains for each spore.

It is classified as a Schedule 1 drug.

This magic mushroom is said to be a schedule 1 drug because of its ability to be abused. It is classified as heroin or cocaine.

Drug enforcement agencies consider this drug illegal and have no medical use, meaning it is not required for any medical use.

According to research, people who take low doses of cubensis strains are more innovative and have better ideas.

The psychedelic effects of Psilocybe cubensis can disrupt standard brain control mechanisms. It increases your consciousness and makes you feel excited and relaxed.

Over time, research has shown that the effects of different Cubensis strains are various, regardless of differences during cultivation. This is because of variations in the species of Psilocybe cubensis.

Below are ten facts about the fastest-growing Cubensis strains.

Facts About the Cubensis Strains

This is a well-known strain, a combination of Psilocybe cubensis and Psilocybe azurescens. The characteristics of this P. cubensis strain are different from those of a pure P. cubensis.

B+ cubensis produces large fruiting bodies, and the spores proliferate.

Furthermore, the strain is easy to grow and produces a sizable first flush. However, the subsequent flush produced by the spores is slight.

The name of this Psilocybe cubensis strain is particular to Panaeolus cyanescens. They’re both different species but somewhat related.

Their physical attributes are similar, but they have different colors of spores, which makes the similarity not identical. In addition, Panaeolus cyanescens is more effective than blue mold.

This strain was first gathered in Burma and is known for its fast and aggressive growth. The level of its potency is relatively high, and its intense trip is enjoyable.

Although the Burmese trip experience cannot be compared to other strains, cultivating this strain is easy.

It has brown caps and pale spots. It is a well-known cubensis. It’s a fast grower, and it fruits quickly. This strain consistently produces a large number of fruits.

This strain produces energetic trips that open the mind to creative possibilities rather than trips with a visual focus.

The Costa Rican Psilocybe is used to cool high-elevation temperatures. Because of the temperature conditions, it cannot be easy to cultivate. This strain is primarily brown and has low potency.

It is originally from Ecuador, as the name implies. It is beginner-friendly for cultivation. The strain thrives despite the harsh conditions in Ecuador. It can grow fruit with any cultivation.

This strain is frequently linked to rock stars. The caps are usually beige on whitish stems. It grows fast, and its flushes are generally significant.

Its potency is average and it grows on any cultivation used on Psilocybe cubensis. Its effect is known to be spiritual, with no physical burden.

Pacific Exotica Spora is the whole meaning of PES. It is the name of the first company to discover it. Consequently, it is now prevalent.

They are tropical strains requiring slightly warmer growing conditions than most Cubensis strains.

They are well-known for their rapid growth and large fruiting mushrooms. Its potency is atypical for spiritual seekers. 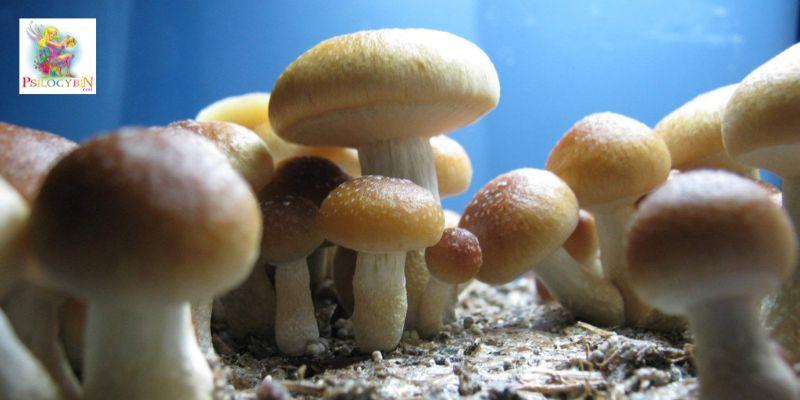 This C. cubensis strain was created to maximize growth and potency. This strain has unusually long stems and large fruiting bodies.

One of the significant properties of this strain is its ability to grow quickly and have its fruits multiply several times. It is common for business purposes, which makes it a common Cubensis strain.

This C. cubensis strain has very high potency with a long-lasting euphoric and high-visual trip.

It is a wild-growing strain in India; it grows well in elephant dung. This Cubensis strain can produce massive fruiting bodies.

It has a brown cap that fades to white around the edges. It is not very large during cultivation, but it is the biggest and tallest Psilocybe cubensis strain.

It is also beginner-friendly for people who want to grow magic mushrooms, as it can stand poor conditions and is resilient to contamination.

Most Psilocybe cubensis is dung-loving for cultivation, regardless of whether it can grow on other substrates. Growers have discovered new varieties in the wild or created them deliberately. These Cubensis strains differ in how fast they grow, their color, size, and shape.